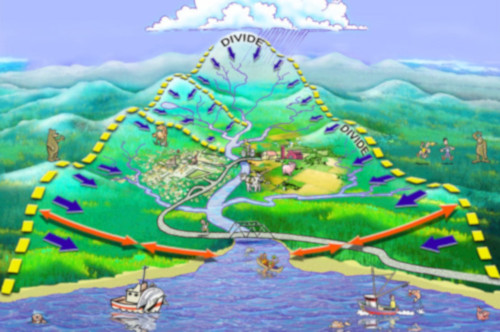 A watershed, also known as a drainage basin or catchment, is a land area that channels precipitation through rivers, stream, or creeks to outflow points such as lakes, tributaries, or the ocean. Watersheds can vary in size based on its geography and point of discharge, ranging from small streams and lakes to stretching across an entire country.
Not all water initially reaches an outlet point. Instead, water can infiltrate the surface where it may eventually run off, remain in the soil as groundwater, or penetrate deeper to an aquifer. Water infiltration is also altered and inhibited by impervious surface, especially in highly urbanized areas. As water moves through the system, it often accumulates pollutants. These pollutants could infiltrate the ground water or travel through the water system and ultimately have drastic effects on the ecology of the watershed or its outlet location.